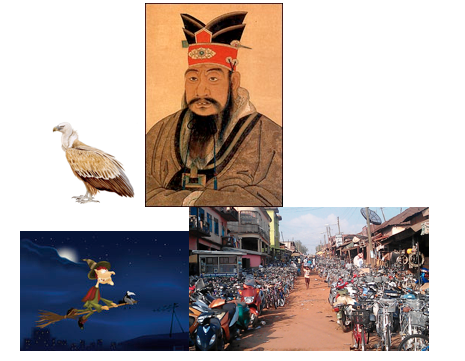 After reading posts in this blog on how the Big Idea to create AIB originated in the cramped quarters of a plane on the way home from an overseas contract, or useful advice for interpreters on how to cope with the unexpected, or reminiscences from a veteran colleague on the halcyon, bygone days of our profession when irritating and time-consuming security measures were few and far between, and interpreters supposedly had the red-carpet rolled out for them, I am reminded of an unforgettable and exotic assignment, the telling of which I trust will not resemble Granddad’s oft-told war stories…
The tale is set almost fourteen years ago, when AIB was just beginning to find its feet, and includes many ingredients which an interpreter often gets a chance to savour during his or her professional life - the inconveniences of air travel, bizarre accommodation, dodgy equipment and having to cope with un-bargained for events, plus elements of the sublime, the ridiculous and out-of-the-blue tragedy witnessed from afar in strange surroundings.

As I packed my bags at dawn for a large international parliamentary event in West Africa, Confucius’ curse “May you live in interesting times” could not have been further from my mind. Ahead of me lay five days’ work in the capital of a state with a diverse ethnic and religious make up, like so many in the continent, one of my first out-of-Europe assignments: an exciting prospect despite facing a long, boring and presumably uneventful journey, and reassured by a bona-fide contract with a reputable international organization and the presence of friendly colleagues on the team, including some experienced “Africa hands”.

Everything started to go awry, however, right from the outset: a sudden wild-cat strike by pilots turned Brussels airport into a nightmare: chaos, cancelled connecting flights, scores of angry passengers, overwhelmed and overstressed staff unable to cope… I’m sure some of you readers are unfortunately familiar with the score. Priority number one was to warn our employer of our predicament, and probable late arrival; that done we attempted to find seats on any plane going towards West Africa. After many hours of endless queuing, cajoling and pleading we were ushered onto a packed, late night, chartered flight bound for Senegal, with uncertain assurances of onward connections…

I’ll spare you all the details: but a trip that was supposed to last just over 8 hours ended up taking 52. This extra time included trying not to fall asleep on a bench at Dakar airport transit lounge (no worse an experience than being holed up in a nearby forlorn beach hotel which had seen far better days, obsessed as we were with keeping nasty invertebrates at bay) and a hair-raising overnight flight to our landlocked destination in a hand-me-down turboprop, with many of the seats not properly secured and loose wiring hanging down from the ceiling. When the pilot first announced that it was his first time on the route, and shortly afterwards that “pour des raisons techniques et très mauvais temps nous devons faire une escale non prévue à Bamako”, my neighbour and colleague turned ashen-faced and made a quick bee-line for the toilets (out of order, of course);other passengers started moaning or weeping… Any fleeting temptation to feel like St.Exúpery dissolved, giving way to barely controllable panic as the ancient creaking aircraft tossed and turned in the invisible turbulence over the Sahel.

Never have I hot-footed it off a plane faster than when we finally landed!

We were given a hero’s welcome on arrival by the rest of the team (who had covered for our absence) at our “hotel” which turned out to double up as a brothel, its usual occupants having apparently been unceremoniously turfed out and the premises getting a hasty coat of paint –presumably like others in town – to house participants and staff at this august international gathering of parliamentarians.
The hotel, in the middle of a slum, was surrounded, moat-like, by a smelly open sewer with various specimens of underfed marauding rodents, but it did have a great beer lounge (with bright red-velvet walls)sporting a preposterously wide  TV screen (of which more later).

The Conference venue had been refurbished for the occasion, but this had not included the (non-standard) booths; sound quality left a lot to be desired and the mobile French booth in one room  actually started to collapse in slow motion around the (local) interpreters who, true professionals, continued working unfazed. Not to mention the odd fat insects which kept dropping onto the desk; in the circumstances consecutive work –of which there was some– was actually a relief.

A feature which sticks in my mind were the large, aggressive-looking griffon vultures in a yard just behind our booth, where we often nipped out to so as to escape the noisy, ineffectual air-conditioning machine. The yard served as a massive rubbish dump, which attracted these huge and ugly, scrawny winged scavengers which glared at us balefully, lest we bizarre looking figures ridiculously dressed in jacket-and-tie attempt to trespass on their territory, which they shared with local inhabitants who searched the dumps for anything remotely valuable.

One afternoon, travelling back after work in the ramshackle shuttle minibus, a Catalan conference translator from Geneva suggested “avui és l’Onze de Setembre,,hauríem de fer una cerveseta per celebrar-ho” , which seemed to me a rather odd  proposal given the setting. On reaching the hotel and entering the bar I was struck by many people, including colleagues, watching in silence at what looked like a thriller on the TV, with two large skyscrapers on fire and plumes of thick black smoke billowing upward in sharp contrast with a clear blue sky. On cheerfully asking what film this was came a curt, hushed rebuke “Felix, this is for real, it’s happening right now in New York “, just as one of the towers slowly and silently started collapsing on screen.

Witnessing this terrifying event live in one of the poorest nations in Africa – albeit with graceful, humorous people, and an admirable mutual respect for religious and ethnic diversity (at least at that time) - must be one of the most surreal experiences I’ve been through. I remember wandering, slightly dazed, at dusk that same day through a smoke-filled, poorly lit, street market, thronged with people –traders, hawkers, musicians and passers-by – seemingly oblivious to what to us was an earth-shattering event, which for all they were concerned could have been taking place in another planet (even 14 years ago, globalization had by no means reached all the nooks and crannies of our world).

The attacks on the twin towers knocked the stuffing out of the conference, which suddenly seemed irrelevant, even to us interpreters- quite a few colleagues had family and friends in New York and were desperately anxious to get home or to some place with reliable telecoms.

After briefly discussing and adopting a hastily drafted condemnatory resolution – I recall thinking at the time in the booth that the language chosen seemed woefully inadequate to reflect the enormity of what had just happened; how often does this occur to us, I wonder? – Business was adjourned a day early. Even at a small sleepy African airport, security measures were very tight, shortly before we took off into what looked to become a darker, more threatening world.

OK, so I haven’t touched upon the techniques or the mental and emotional processes involved in interpreting, which have been very well dealt with in some detail by other colleagues in earlier posts in this blog. After all, these processes are basically the same whether your conference interpreter’s booth is next to a designer-fashioned hotel lobby with scented teas and tasty munchies or rather a dusty, reddish wasteland with hungry gyps fulvus eyeing you up for size and wishing you were carrion. From a personal experience I have focussed on what I would call some of the ancillary aspects of our job. My recommendation would be to ensure that if you are called to an assignment in so-called “exotic” locations your hand baggage should include not just anti-mosquito spray, water purifying tablets, proof of medical cover and life insurance and so on, but also large dollops of common sense, curiosity, humour and humility (the latter admittedly a scarce commodity in the profession) and which in any case will stand you well in your professional career, wherever you are.