...ten things clients say that you should never believe 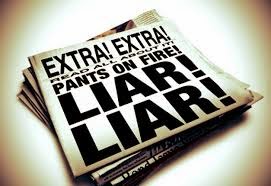 As the years pass and colleagues acquire experience both in interpreting and in organising the service, we learn to recognise a number of cases where our dear clients tend to be a teeny bit - to use the time-honoured euphemism - "economical with the truth."

Let us take these in chronological order. An initial phone call with a prospective client or an interview with one whose project is in preparation is likely to feature the fallacy "No ´retour´ will be needed, all the speeches will be in (for example) Spanish and there will be no questions, so no need for interpreting into Spanish." Believe this at your (or, in fact, their) peril: what would be the use of a medical presentation, press conference, etc. where there was no dialogue? And it´s such a shame if - because interpreters with the appropriate language combination have not been furnished - local journalists cannot ask for clarification, if that dialogue cannot be established.

The client may well believe that one; the same, however, cannot always be said of the chestnut "I´ll confirm tomorrow", uttered after weeks of negotiation with repeated changes of language combination (what is it that makes clients think a Spanish-English-German team can be magically transformed overnight into a Greek-French-Italian one?) and just days away from the conference, when the colleagues one has optioned are champing at the bit to be freed so that they can accept other work proposals they have meanwhile received. "I´ll call you back in five minutes" - don´t hold your breath! - is a reliable harbinger of this one.

When it comes to the stage of discussing distribution of speakers´ draft texts and presentations, there is a familiar set of porkies which, one has to assume, are motivated more by laziness than by mendacity. The classic fib is "I don´t have any texts", also essayed by disloyal or simply brazen speakers buttonholed on the fateful day. This attitude has been compared with expecting to send a brain surgeon into the operating theatre without bothering to let him see the X-rays. There can be no better response than the Danica Seleskovitch technique: to stamp one´s foot and (drawing oneself up to one´s full diminutive stature) declaim, "I´ve been in this lark for twenty years and there is always a text!"

The next whopper is one of our favourites: "It´ll be easy, it is not at all technical." Here again it is plausible that, by virtue of a kind of subjective mirage, the speaker believes their statement: the speech is jam-packed with the very latest terms and concepts in, say, chemical tensiometry, but - since our friend eats, breathes and sleeps detergent surfactants - he cannot imagine that it is not as accessible to the layman as Disney´s "Winnie the Pooh" is to the average three-year-old.

Conference day dawns and the consultant interpreter or team leader shows at the venue well in advance of the agreed time (she could not sleep anyway, so why not?) There they are greeted by the technician with the evergreen "The equipment has all been checked and is tickety boo." In this case it is hard to determine whether they are bona fide or knowingly lying through their teeth; the fact is that, again (indeed even if the equipment has been checked), it would be a most foolish colleague who accepted this assertion at face value instead of personally verifying that each and every microphone in the booths and in the room, as well as consoles, headsets... is fit for purpose: otherwise one or more is certain to fail, bringing the proceedings to a spectacular grinding halt.

The next falsehood is, of course, our old friend "I´ll be brief." Marshal your ballpoints and gird up your consecutive pad, or - in simultaneous - make sure you have several bottles of water so as to keep your whistle wet, for this is about as likely to be true as, countless gruelling minutes later, the timeless "by way of conclusion..."

Occasionally, particularly in the context of consecutive interpreting in the field, one may encounter this curious specimen: "Just give me a literal translation, that will be best." This is not so much a deliberate untruth as a fond delusion, in the face of which, however, it is hard to maintain one´s composure - not least because it shows a crass lack of trust in the professional. Would we need to spend years training in conference interpreting techniques, reformulation..., if it really were sufficient merely to transpose words? Would they need to put up with (and pay for) us, rather than simply use Google Translate? The temptation is to reply, "To the saint of what: because it emerges from your eggs?"

"The cheque is in the post." These days this one has to be a barefaced invention; when were you last paid by cheque?

Clients: dontcha love ´em?
On the other hand, where would we be without them?
at 00:10 No comments: