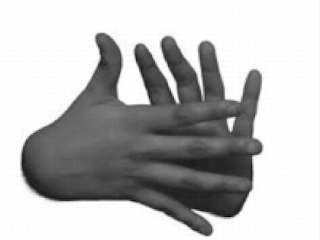 We live in a world in which we are more and more aware of languages and the differences between them.

Today we will go into the world of the Deaf and learn about how they communicate among themselves and with hearing people. Our guide is Elena Sanz, a young Spanish deaf woman who communicates mainly via sign language although she grew up in a world of hearing people and learned to express herself orally as a child.

The conversation took place with the aid of Gloria Gascón, a sign-language interpreter.

Elena was born totally deaf because her mother had the measles during her pregnancy; there are no other deaf people in the family, and she learned to speak with her mother's help. Sign language was not well known in Spain when she was a child and she communicated verbally in school, although with difficulty. She read lips and was assisted by her teachers and the school's speech therapist.

When she was in the eighth grade her mother discovered sign language and Elena began to learn it.

She studied to become a nursing assistant without the aid of an interpreter. Today deaf students can be accompanied by interpreters at school, especially in secondary and higher education.

She is very much aware of the difficulties deaf people face from her own experience; nevertheless, in her own words, she is happy with her life.

Gloria maintains close ties to the deaf community in Spain through her different professional facets: Catalan and Spanish sign language interpreter and interpreter-guide for the deaf and blind. She is also a speech therapist and special education teacher.

Types of communication among the Deaf

In general, we can speak of three means of communication among the Deaf: oralism, sign language and cued speech.

Oralism is spoken language. Deaf children learn to speak like any baby by associating an object with a speaker's lip movements instead of associating it with a particular sound. If this connection is lacking, the deaf person sees only the lip movements but does not know what they mean.

They usually learn to speak at a younger age than hearing babies. A four-month-old deaf baby can "speak" by signing simple words. Babies also invent their own signs, such as "Mama", "Papa", etc. Many deaf people grow up as oralists and later learn sign language.

Some deaf people reinforce their oral language with a system of manual gestures known as cued speech, which helps overcome problems of ambiguity in lipreading.

Humans have always used gestures to communicate and it was natural for them to become an important means of communication for deaf people. Simple gestures evolved into sign language, which has a rich grammatical structure of its own characterized by the configuration of the hands, their movements, orientations and spatial location, and other non-manual elements such as lip, facial and tongue movements. Some signs are iconic representations of objects, actions or people and others are arbitrarily defined to express feelings and other complex concepts.

Interpreters for the Deaf

It is perhaps more accurate to speak of "interpreters for the Deaf" rather than "sign-language interpreters", in view of the variety of ways used by deaf people for communicating.

The career of professional sign-language interpreters is similar in many ways to that of interpreters of spoken languages, and their training is likewise similar. They must first acquire thorough knowledge of a sign language and then follow an appropriate course of studies. Some interpreters specialize in specific areas, such as medicine, legal matters, and a particularly important area for the Deaf: accompanying them throughout their school years, especially in job training and university studies. 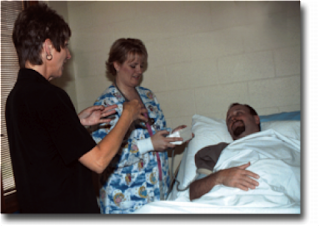 Others choose the path of conferences or television. We have all seen them in a conference or meeting room or on TV, dressed in their simple black attire (or another plain color such as purple or navy blue) to enhance the contrast with their hands, which are their main vehicle of communication. 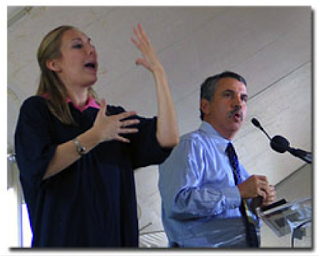 The idea of creating a device to facilitate hearing in deaf people has been around since the 18th century and what we know today as the cochlear implant did not become a reality until the second half of the 20th century.

In spite of the interest in these devices as a solution to what the majority society defines as the "problem of deafness", many deaf people do not agree because they do not see their deafness as a problem, especially if they were born deaf and have no experience of hearing.

The following article presents the viewpoint of many deaf people about how they are subjected to pressure to have cochlear implants placed, and other practices of imposing forms of communication (such as oralism and lipreading) other than the system they have already learned and consider their native language.
See: http://goo.gl/xL0IOE (in English)

Furthermore, implants are not the effective solution they are claimed to be. As explained by North American psychologist Harlan Lane (expert in deafness), implants do not always fulfill the promises of their supporters and sometimes do not work.

Doctors recommend placing implants before a child is 2-3 years old; it is not advisable later because "everything becomes noise", as deaf people describe it. By the time they reach this age, deaf children have learned a system of communication and have the foundation of their mother tongue. Placing implants later causes confusion when a person has no experience of hearing and interpreting sounds.

Nonetheless, they may be useful for people who have lost their hearing later in life and wish to recover it.

Resources for the Deaf

Deaf people have commonly been cast aside from the  society and considered "disabled". This perception is now changing, which has led to the creation of more resources for deaf people as they wend their way through a world in which communication starts with hearing.

Nonetheless, such attitudes persist and, consequently, deaf people often feel rejected and form their own community, sometimes to the extent of excluding hearing people.

Associations for the Deaf have been created in many countries to offer activities and information of interest to them, in addition to forums and other meeting points online and in physical places.

And a final note of interest. There is a university for the Deaf in the United States where all communication takes place in sign language. Gallaudet University http://www.gallaudet.edu/ is the world's only university with programs and services specifically designed to accommodate deaf and hard-of-hearing students. It was established in 1864 by an act of Congress and its charter is signed by President Abraham Lincoln.