A Tribute to Richard Kingsbury 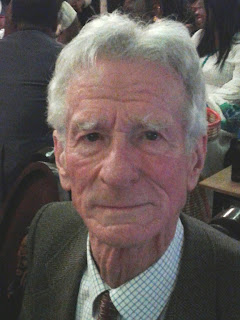 I recently came across a eulogy of the late Richard Kingsbury, conference interpreter among many other pursuits, delivered by his cousin Martin at his funeral service. It makes for a good read, and brought back memories of my encounter with Richard earlier this year.

Now that just over six months have elapsed since his passing, I would like this text to be a brief tribute to quite an original, out-of-the ordinary and very likeable colleague who I had the privilege of working with.

I must add, that sadly, I was the last person to work with him. I shall also share a couple of thoughts on a tricky subject- namely how long an interpreter’s working life should last.

For those who never met or heard of him, Richard Kingsbury was a long-standing practitioner of our profession who for many years was an in-house interpreter and translator with the International Coffee Organisation (ICO) based in London, later becoming  a distinguished freelance working for many international institutions and commodity organizations. Our paths had only crossed fleetingly, at EU or UN- agency meetings; I had been briefly introduced to him years back but we had never worked together. I had however heard of him on the grapevine, so to speak, and on the basis of hearsay – oh, dear, how often is this the case in our profession!! – I had formed an image of someone  “d’un certain age” and like some elderly interpreters, quirky, temperamental, eccentric and rather on the tetchy and  morose side; everyone admitted however that as  an interpreter he had much experience and professional prestige. He was known to be very well read  and widely travelled, with a passion for languages, working  in both the English and Portuguese booths, with active Spanish, and a longish list of C languages, including Russian and German.

So it was with a certain sense of trepidation that I learned I would be working with this - in my mind -rather formidable character in the English booth at a week long series of coffee production-related events in Addis Ababa, Ethiopia, in March this year.

I had been recruited at the last minute  by the ICO. a body I had never worked for, dealing with a subject- coffee – of which I didn’t have much of an inkling apart from enjoying a really good “macchiato” while knowing it was probably not very good for one’s blood pressure.

“Better watch your p’s and q’s” I thought to myself, as I hastily started to gen up on the basics of this commodity and its organisation, learning about the different varieties – arabiga , robusta – and the diseases: rust, wilt, et al...

When the members of the interpreting team gathered at our hotel in the relatively sanitized UN and embassy district of Addis, slightly bleary-eyed  after predictably long and tiring journeys from all over Europe,  I met a wiry, alert and well-dressed silver-haired colleague, very courteous but rather quiet, even circumspect.

On day one of the meeting my reservations quickly dissipated. Richard turned out to be a very helpful booth-mate, assisting me with key vocabulary and above all, as an old “Coffee” hand (that’s how he referred to the ICO) he gave me invaluable background on the ins and outs of the body, its origins, evolution and its “raison d’etre” after the end of coffee quotas in the early `90’s, plus the vagaries of the the economics and politics of  the global trade in coffee,etc…chapter and verse,  all  with a mercifully light touch.

As time wore on, he became quite chatty and  sprightly.

A digression here : one dubious advantage of manning the English booth in many international organizations is that one has plenty of down time in the company of one’s colleague  - which can be good or bad, of course (I’m not gloating about this controversial aspect of the English booth’s workload – or lack of it; it’s just the way things often are at the moment. Perhaps someone else will discuss this in a future post). But it does give one the chance to have enjoyable conversations if the opportunity arises, as it did on this occasion

Richard talked about his career and life in general in a very humorous, self-deprecating way, devoid of all pomposity or self aggrandizement, rather with a quiet wit and often  a delightful and slightly mischievous twinkle in his eye,as one team colleague remarked. He was a  refreshingly good raconteur indeed, with many interesting tales to tell, and it was a pleasure to listen to him.

On reading the words written by his cousin, who knew him well over a whole lifetime, and therefore infinitely better than someone who only shared four days with him, in and out of the booth,I became aware what a varied and interesting life Richard led. But some of the stories he told me are there, obviously with many more details: for instance his  recollection  of a blissful childhood in  Monserrate, the estate near Sintra built and owned by a wealthy English family and managed by his parents. His vivid description of the Serra da Sintra landscape - which I am familiar with - did justice to the eerie, almost magical nature of the thickly-wooded hills, often shrouded in mist. His happy childhood memories  had drawn him there over the years whenever he had a chance, and in fact he had a second home there. He told me about how the wondrous vegetation there had instilled in him a love of gardening and horticulture; he talked to me proudly of the farm he lived on in Sussex, his garden, fruit orchards,vegetable plots   and his collection of domestic animals. He mentioned  how much he loved the outdoors, and disliked big cities and to the extent he and his wife tried to be as  self-sufficient as possible.

But he also talked at length about his travels;  of making his way  overland as a young man from London to Cairo via Istanbul and the Middle East, on foot, hitch-hiking and by whatever other means of transport became available - a trip that would be very difficult if not impossible today. Listening to him reminded me of Patrick Leigh-Fermour’s magnificent descriptions of his wanderings on foot through Central Europe in the ‘20’s and 30’s.  which he had also read and much enjoyed. That led to his discussing Willaim Beckford’s “Travels in Spain and Portugal” written in the late 18th. century in such an amusing way  that it made me want to read the  book (which of course I have not  yet got hold let alone even  began)

He had worked as a young man in San Miguel de Tucumán, in northern Argentina, teaching English – and had very fond memories of  his time there, describing in quick brush-strokes some of the characters  he had met- he had indeed a way with words, borne out by his vivid descriptions of his travels through the Andean countries, including a scary bus trip up (and down)  a  nightmarish narrow mountain road in Bolivia with a sheer drop to a deep ravine; he  recalled seeing a prescient sign by the road side “ Recuerde  que está en las manos del Señor”  as he realized the brakes were getting faultier by the minute. His  descriptions of  staying  with Aymara,Quechua and other indigenous communities in Bolivia,Peru, Ecuador and Colombia long before mass tourism made inroads into these areas, bore reminiscences of a very young  Ernesto ”Che” Guevara’s “Diario de una motocicleta”, his diary of his travels through Latin America.

Mentioning Guevara, he had also by the way visited Havana shortly before the fall of the Batista regime and the entry of Fidel Castro into the city: he talked about the wild and slightly feverish end-of-an-era atmosphere in the city.

We also discussed our profession and the many people he had met– one thing that struck me was that he was always very discreet and never once criticized a colleague, and surely he must have met more than his his fair share of  interpreters throughout his long professional life.

This brings me to the question of how long an interpreter ought to stay on the job (a topical matter for me, by the way, as I am rapidly approaching my mid-sixties). Richard started working at the ICO in 1964, a year when most of the  current practitioners of this noble profession were either unborn ,still toddlers, or in their early childhood. At one point Richard was telling me how much he enjoyed flying on his micro-light, and how he had let his licence lapse a few years earlier when he was 76. Stunned I asked him how old he was: 83, he replied.

Now many of us have unfortunately worked with ageing colleagues who were past their “shelf-life” and who should have known that it was high time for them to bow out with dignity. I personally am happy to continue working as long as I feel that my abilities are still unimpaired, but would not wish in any case to be still working much after 70 (dear readers, you may call me to account when that moment arrives!)

Richard Kingsbury was probably an exception to the rule: a keen mind, still full of curiosity about people and life in general, a sharp wit, and I bear witness, an excellent interpreter (granted, of course that he knew his Coffee backwards)

He was also a great companion, appreciated by all in our team, and we were all shocked and upset  at what happened. On the last day he did not turn up in the booth- concern turned into alarm when after frantic calls to the hotel and the UN police he was found unconscious in his bedroom and hastily taken to hospital, where a massive brain haemorrhage was diagnosed. The local organizers and government authorities ensured he got the best local medical attention available, but he died a few days after the end of the conference, which deeply saddened all of us in the team.

He had at one moment told me he dreaded physical disability and losing personal autonomy and becoming dependent. So in a sense although terrible for his loved ones, for him it was not a bad way to go.

I got the impression that he lived his life to the full right to the end, with an adventurous  spirit, but also a very practical approach to life, as well as with an enquiring mind. In the short time I was with him I took a liking to the man; he was good company and I enjoyed his sense of humour, his unfeigned modesty, and total lack of snobbishness, his intellectual  curiosity about both his surroundings and the people he came across, his friendliness and good manners. But I also suspect that he was a very decent human being.

Farewell therefore to an unconventional and amusing gentleman – may he rest in peace.